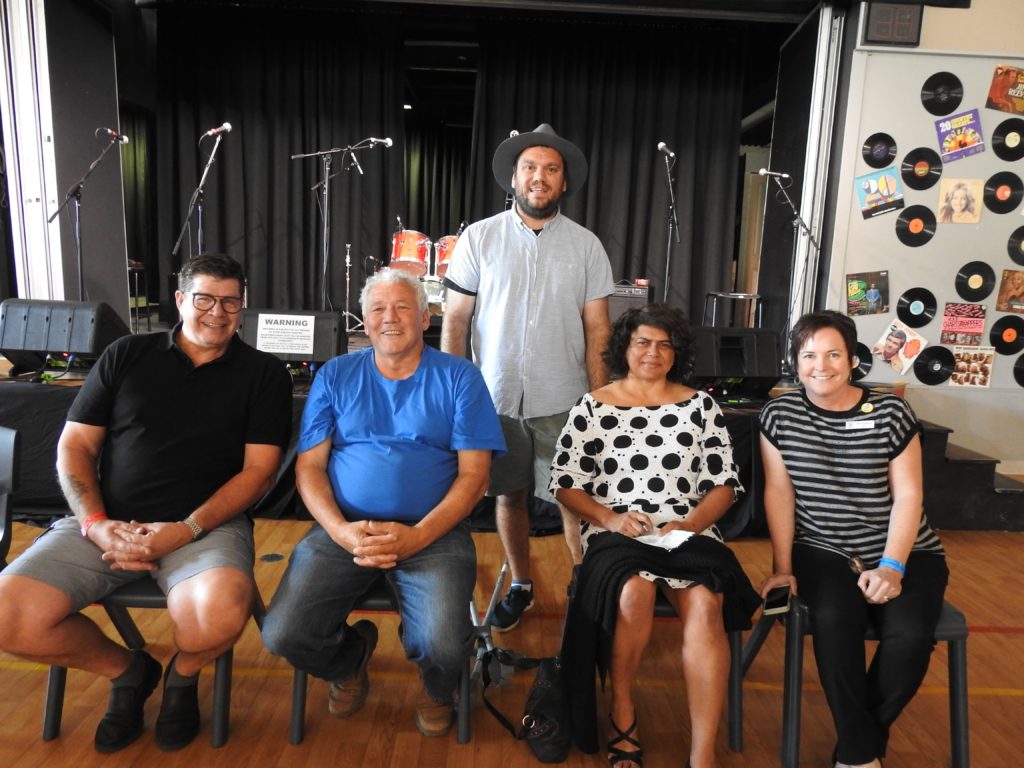 A forum inviting the audience to ask curly questions around indigenous culture, language and issues was held at the St James Catholic College auditorium as part of the Cygnet Folk Festival.

Mr Everett Smith said that the forum was a great opportunity for a predominantly white audience to grasp the perspective of how Aboriginal culture is seen and shared, and to ask the questions that they might ordinarily think are a little inappropriate.

The discussion ranged from changing the date of Australia Day to the prevalence of domestic violence in indigenous families, from discrimination to the benefits of being Aboriginal.
Mr Dillon said, “I don’t think there are too many benefits of being Aboriginal.
“Our language has been taken, our kids are more likely to end up in prison with less education and have less chance of employment.”

Ms Dillon said that the funding allocated by the government to bridge the gap between indigenous and non-indigenous health is making some inroads, but the difference in life expectancy between indigenous and non-indigenous members of the community remains as a stark reminder that there is still a long way to go before the gap is closed.
She said that the benefit of being Aboriginal is the indigenous connection to land and to country.
“It is very important,” she said.
“I may not own that land economically, but I own it spiritually, and I have a big stake in keeping it protected so that we can all get the benefit from it into the future.”

Mayor Enders said that indigenous self determination is crucial to ensuring the best outcomes for Aboriginal people.
“There are a lot of politicians that haven’t worked with Aboriginal people,” she said.
“And just meeting with them now and then isn’t working.
“Aboriginals need advocacy at the local level, to have their own councils with qualified people to support them, their own staff and their own people.”

Mr Dillon said that, in addition to self determination, it is imperative that Aboriginal people regain ownership of land that has economic value.
“Native title is the weakest form of ownership there is,” he said.
“I want to own land where we have the say over what happens on that land, I want the rights to our land to be full ownership.”

With Australia Day coming up this Saturday, and the ongoing battle for Aboriginal people to have the date of celebration moved away from the contentious invasion day, the question around whether the Huon Valley Council would change the date was almost inevitable.

Mayor Enders said, “I am mindful that I represent all of the community, I would be proactive in surveying the whole community so we can get a true idea of how the community feels.
“I personally feel that our community needs so much more education around Aboriginal people and their connection to land.”

Councillor Newell said, “The fact is that there are people not enjoying that day, they are thinking back to the barbaric acts of the invasion.
“I’m hoping that the Huon Valley Council can take this step, and if we miss out on some funding as a result, too bad.
“I want an Australia Day where we can all be happy.”

All on the panel agreed that domestic violence in the Aboriginal community is having devastating effects on families.
But, Ms Dillon said, it is important to realise that it is not just Aboriginal men who are perpetrators of the violence, as many Aboriginal women are married to white men.
Mayor Enders agreed, “There is a real focus on Aboriginal violence, it’s very unfair that government focuses its attention on Aboriginal domestic violence, when it is, in fact, everywhere.”

Tasmanian Aboriginals, in particular, have not only faced discrimination for being black, but also discrimination for not being black enough.
Mr Dillon said, “If someone says they are Aboriginal, I tend to believe them, it doesn’t matter whether you are recognised or not, so long as we keep our language and culture strong.”
Ms Dillon said, “Nobody can tell you how Aboriginal you are, the only people who can do that is your own family, because they know exactly who you are and where you came from.”

Mr Dillon said that the reconciliation movement is making a difference, and he is hopeful for the future of his people, and believes that 2019 will see more positive outcomes for Aboriginal people in the Huon Valley.

He said this year he would continue to immerse his people in their language and their culture, to take them to spiritual places and instil pride in Aboriginality.

Ms Dillon said that she hopes that 2019 will see further reclamation of the Melukerdee language, with more songs and stories developed in the local indigenous language.

Councillor Newell said that he hopes to see the indigenous flag flying alongside the Australian flag outside the Huonville Town Hall this year, while Mayor Enders said that she is working on a proposal with SETAC to develop a Reconciliation Action Plan for the Huon Valley.