The following is an article by the Huon News, originally published on Wednesday, 12 December 2018. Republished here with permission.

Is the Valley iconic? 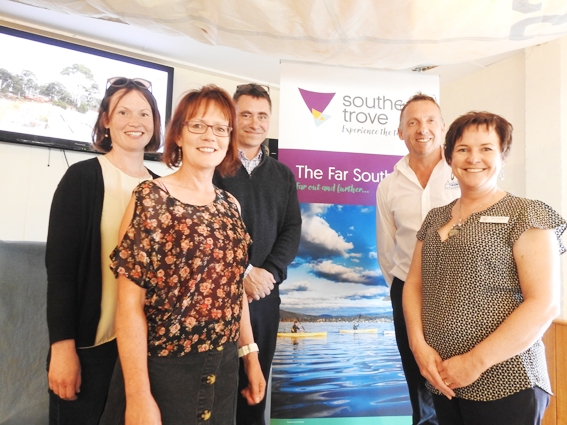 From left, Katie Stott from Dover and South Action Group, Rachael Trueman from Far South Future, Alex Heroy from Destination Southern Tasmania, Gary Ashdown from Far South Tasmania and Mayor Bec Enders at the launch of the proposal for an iconic walk in the Far South.

The Huon Valley will have at least three opportunities to secure the $20 million State Government funding on offer for Tassie’s Next Iconic Walk.

The State Government announced the proposal in October, and has extended the deadline for submissions until Friday, January 11.

Far South Future (FSF), Far South Tasmania (FST) and the Dover and South Action Group (DSAG) have joined forces with Destination Southern Tasmania (DST) to develop a proposal for a four day, three night Cave to Coast walk from Hastings Caves to South Cape Bay, South east Tasmanian Aboriginal Corporation (SETAC) has collaborated with HuonTrails.org to submit a proposal for the palawa lugganah trail from Huonville to Cockle Creek, while the Geeves Effect Inc will put forward their long-running proposal for a walk from south-west of Geeveston to Lake Geeves, which lies at the base of Federation Peak in the Southwest National Park World Heritage Area.

Rachael said that, while FSF had been born out of a time of community turmoil during the proposed Port Esperance woodchip export facility, the group was now focused on healing the wounds caused during that period, and creating a positive future for the Far South region.

“We are hoping now to focus on the future,” said Rachael.

“We have been working with the SETAC and private landowners, and collaborating with the Huon Valley Council (HVC) and DST to put this proposal forward for the region.”

It adheres to the Tasmanian World Heritage Management Plan 2016, including no new tracks into the wilderness, but rather it would take existing trails and tracks, build new where necessary, and link them all to existing tourism experiences.

They would ride on the Ida Bay Railway train to Southport Bay’s Deep Hole, or cycle along the tracks if they prefer, hike around Southport Lagoon, be guided by local indigenous and other specialist rangers, boat across Recherche Bay toward Cockle Creek, then take the hike out to South Cape Bay to stand in the presence of Australia’s southernmost point.

Alex said that there is certain to be stiff competition for the State Government funding.

“It needs to be a driver to get visitors to the state to get the rolling economic benefits,” he said.

“Even if it doesn’t get up, we will basically have a shovel ready product, but we believe it will get up.”

Both Rachael and Alex said that they are also supportive of SETAC’s proposal for a trail from Huonville to Cockle Creek, which has been born out of Councillor Paul Gibson’s initial Huon Trails proposal.

CEO of SETAC Tracey Dillon said that the Aboriginal community of the south east had recently held a Christmas celebration at Burton’s Reserve, where they discussed possible names for their proposed trail.

“The community has approved the name palawa lugannah, which means ‘footmark of black man’ in the language of the south east,” said Tracey.

The proposed walk is described as a “travelling adventure from town to town” in the Huon Valley, where walkers can experience the local cuisine that the Valley is famous for.

The trail then transitions to a landscape that is centuries old and embraces the stories of the lyluequonny and melukerdee people.

The palawa lugganah track links Huonville, Geeveston, Dover, Southport and Cockle Creek via an off-road walking and cycle track, and will also be accessible to electric bikes for those who require assistance to complete the distance.

The Geeves Effect proposes a walking track to the edge of Lake Geeves, at the base of Australia’s highest cliffs – 670 metres from Lake Geeves to the summit of Federation Peak.

The aim is to create a wilderness experience and accommodation precinct southwest of Geeveston, outside the World Heritage Area, in the vicinity of the Tahune Airwalk.

The Geeves Effect’s Robert Thompson said that, while the group has received encouragement from both Federal and State Government for the project and is looking to work proactively with all three levels of government to get the project to the next stage, the group has yet to resolve its response to the Next Iconic Walk EOI, and will be considering options in the new year.

Mayor Bec Enders said that the HVC is pleased to offer support to all community groups who are putting in an EOI for Tasmania’s Next Iconic Walk.

“And an equal level of service will be provided to all community groups that are interested in putting in an EOI that aligns with council’s strategic plans for the Huon Valley.”